What a busy couple of weeks! Not only has my NGO research project begun picking up speed, but in the mean time, I met with some World Bank folks, a partner from one of the Big 4, presented and chaired a session at an international conference, taught an MBA-level class, traveled to Italy to visit with family, and survived a Jethro-almost-dying incident after he ate 28oz/800 grams of dark chocolate.

Despite all of the busy days, I am still finding the time to enjoy life at a slower pace. I make the time to sit at a coffee shop and enjoy my mid-day espresso. I find myself smiling as I ride my bike to downtown Bucharest instead of frantically checking the clock for fear of being late to class or a meeting. I recognize that I’m in a tremendously lucky situation and wake up grateful to be here… many days. I would be lying if I said my life was full of rainbows. We’re living in a developing country that still has oligarchs deeply embedded in the political landscape. Therefore, we experience challenges on the daily. But we’re living in Bucharest during such a dynamic time of history that all can be forgiven (after a couple glasses of wine, of course).

Every day we’re surrounded with new development and innovation, and like any entrepreneur knows, that also means lots of growing pains. Talking to expats that have been here for a few years they keep saying to us, “You have NO idea what it was like a few years ago… this place is developing right in front of our eyes.” I totally agree; it’s changing rapidly. When researching things online you have to be conscious of the posting date, because if it’s more than a couple of months old the advice is likely to be outdated or defunct now. This ain’t my first rodeo regarding travel, but it’s the first time I’m taking the time to absorb it.

As many of you know, I took a year off and traveled around the world from 2007-2008. In all, I traveled to 23 different countries all throughout Australasia, Africa and Europe. I appreciated the travels at the time, but did not stay in one spot long enough to do much more than check into the hostel, take a few pictures, exchange a few stories with fellow travelers, and get on the road again – often to a neighboring country. I never really gave myself the chance to truly sit down, take it easy and think about what life is like for the folks in these countries. Even though I went to a lot of really cool places, I was totally exhausted by the end of it because I was in a constant state of NEW! NEW! NEW! I can remember going to the Amalfi Coast and saying in a monotone voice, “Oh, this is pretty.”  By the end of my world tour, I ceased the ability of surprise anymore. And while I had a good sense that life was very tough for many people in developing countries, I didn’t realize the extent to which there was difficulty. Or why. Just that it existed.

This time around, actually planting my roots for a year, getting acquainted with the educational system, the tax system, and kvetching with folks born and raised here, I’m able to take the time to think about life much more in depth. I’m adopting a much more flexible mindset. My service expectations went from, “Impress me” to “Let’s just get this done.” It’s forcing me to reexamine how I interact with people. To master the art of small talk (Romanians love small talk; I suspect it’s a way to suss out who to trust and not trust). It’s also forcing me to reexamine how to teach and structure my classes. More importantly, it’s also forcing me to examine what I plan to do with my research. I have soooo many theoretical questions spinning in my head that I am trying to pick and choose the best options. Romania, in many instances, turns several established theories on their head. I’m in nerd heaven!

As a way of learning to enjoy life, in the past couple of weeks, I had the opportunity to play tourist in both Romania and Italy. I traveled to Cluj-Napoca, also known as the Heart of Transylvania, for a couple of days for a conference. As you would expect, it’s a gorgeous city. I’m looking forward to going again and learning more about the city. I was there for work, but took some time to wander around the city and talk to as many people as I could. As I’ve been learning, there’s Bucharest and everywhere else. The rest of the country is very different than Bucharest, and Cluj was no exception.

As I mentioned, my expectations for service are decreasing. I think folks here generally worry much more about survival then being in a constant state of happiness and it’s having a nice effect on me. Decreasing my expectation levels has increased my overall satisfaction levels (we like to call that disconfirmation sensitivity in the marketing world).  However, my good ol’ American service expectations are still lingering just below surface level and will rear their ugly head every now and again. Sometimes justified, sometimes not.

For instance, in one justified example, during the flight home from Cluj, I experienced one of the scariest flights of my life. It’s a very short flight between Bucharest and Cluj- only about 45 minutes. The distance should take 2-3 hours by car, but since the roads need *ahem* improvement it’s more like a 6 hour drive, so I flew instead. I opted to take a jet instead of a prop plane, because, well, I trust a jet more than a prop plane. In hindsight, this was a very wise choice. The flight started off well. Everything seemed to go according to plan for such a short flight, we basically got up in the air, had a drink and landed. As we descended for landing it seemed like everything was normal until we crashed onto the runway harder than I’ve ever landed in a plane. The plane bounced, then skid from side to side a couple of times, but before I could get too freaked out, we ascended right back into the air as fast as possible. I mean, my back was glued to my seat as we ascended back in the air.

As soon as I realized what was going on, and my adrenaline took over the reins, I looked around and noticed that I was the only person on the plane who was upset. ONLY PERSON. I looked around with sweaty hands and a beating heart because we almost crashed, but I was the only person visibly shaken. Most folks continued their conversation with the person next to them like nothing happened. And here’s the real kicker– we never received an explanation for what happened. The pilot finally made an announcement about 15 minutes later but only apologized for the late arrival to Bucharest. I never found out what happened. Did we run out of runway? Did we land on the wrong runway? Was it too rough of a landing to continue without crashing? Were we about to crash into another plane taking off? Who knows. Your guess is as good as mine. I learned that when you maintain low service expectations, (i.e., arrive to destination alive), your satisfaction levels increase. That’s much easier than expecting service personnel to dazzle you! And so while my service expectations for dissatisfaction were justified, I’ve learned it’s not worth making a fuss here. It won’t get me anywhere except for causing more of a headache.

The following day, I found myself back on a plane but this time with Carl and Isaac to visit family in Naples, Italy. Utilizing my new “low expectations” approach, we arrived to Naples alive and therefore, satisfied. See how easy this approach is?

Fortunately, Isaac was in a great mood and we were excited to introduce him to my family as well as to real Italian food. We sat down to celebrate my cousin’s 21st birthday (a birthday that does not have as much meaning in Italy as it does the US) and to eat his favorite dishes. I, of course, cannot remember the names of the dishes that we ate, but trust me they were beyond delicious. My cousin is an A++ chef and should consider opening her own restaurant.

One of the most charming things about Naples- instead of carrying their groceries up the stairs, they have little lifts on a string that pull them up for you.

A blurry, but fun picture of my family in Naples 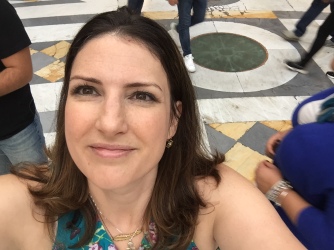 Over the next few days, we explored downtown Naples, Sorrento and Pompeii. It was such a nice time catching up with my cousins and playing  tourist for a while. It also provided the opportunity to understand how closely Bucharest is connected to the rest of Europe. Since I’ve only ever traveled through European countries and didn’t actually live in Europe before, I never paid attention to things like clothing detergents (finding a good stain remover is the bain of my existence), Ziploc bags (there are none here! IKEA sells the closest substitute), and other types of every day consumption purchases.  Visiting family in their house, provided us the chance to take note of what was similar and dissimilar to what we have available in Bucharest. We were pleasantly surprised when we discovered that we have access to many of the same brands and stores. We laughed when we found out that Starbucks was nowhere to be found in Italy. I knew that from teaching International Marketing in the past but also assumed that Starbucks would have figured out how to rest on their mega-branding-laurels to woo the Italians since the last time I checked about their entry. (But don’t you worry, Starbucks is entering Milan in 2018). 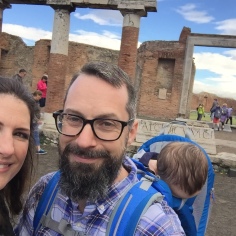 Pompeii with my loves. Isaac found the ruins boring.

Capri and the Posillipo at Sunset

While we were in Naples, Jethro gave us a scare. He ate two bags of dark chocolate candy –a toxic dose– at our dog sitter’s house. If you know Jethro, you know he’s mischievous. If he wants something, he’ll get it. He counter-surfed while our friend Colin and his girlfriend were out to dinner. When Colin got home he saw what Jethro had done, he realized immediately that it was an emergency situation. The first thing you have to do when dogs eat chocolate is get them to puke it up. (I know what you’re thinking…. another puke story! Yes!) The easiest way to do this is to give the dog some hydrogen peroxide. Colin did not have any peroxide stocked at home. And since this occurred on a Sunday night in Bucharest, all pharmacies were closed. Colin and his girlfriend rushed Jethro off to an emergency vet instead. Thankfully Jethro is such a big dog, because he was not showing any levels of toxicity, but he ate a fatal level of chocolate. The vet examined him, gave him some medicine to get him sick, then sent him home on his merry way. The total bill for the emergency visit, including the exam, an X-ray (to make sure there was no obstruction) and medicine was $70. Another reason to love Bucharest. That could have easily been a $500 night in Chicago! Oh, Jethro…..

Applying my new philosophy towards life with this equally scary situation, I realized there was nothing I could do to fix this scenario other than throw money at it (i.e., pay for an emergency vet), so why stress about it? I kept my expectations low and it increased my satisfaction levels. Ta dah!

My advice to all of you is to try decreasing your expectation levels. It’s amazing how much less stress you’ll have.